How to Catch Employees Doing Really Stupid Stuff...Plus a Recipe!!

Years ago, when I was new to the working world, I had the good fortune to report to a boss who was a bastion of workplace wisdom. There were several people in the organization whose technical skills were superior to those of my boss, but he worked his way up the chain of command with common sense and first-rate people management skills. I remember that some of the people in my hiring class didn't like reporting to him because they thought they would learn more by working for one of the organization's more technically gifted quant wizards.

In hindsight, I'm glad I reported to this man. He taught me early on that technical expertise is only going to get you so far. Equally important are your interpersonal skills and your ability to make decisions in a competent manner. Afterall, if we're being honest with ourselves, there will most likely be someone (or some program) more technically gifted than ourselves. Assuming one is reasonably competent in his/her field, one's management skills are most likely to determine career advancement.

My former boss had several direct reports who worked in other cities and one of his favorite sayings was: "If you can't be everywhere, be unpredictable." Once in awhile, he would hop a flight and show up in his employees' offices unannounced to check up on them. Sometimes he'd announce he was heading home early, only to re-appear later to see whether people were getting their work done.

At the time, I didn't have the pleasure of supervising anyone, so I didn't give my boss's tactics much thought. But his unorthodox approach to keeping an eye on people has proven immensely helpful since moving to Sand Land. Between visiting various branches and attending off-site meetings, it is impossible for me to keep an eye on everybody everyday. And sadly, I don't yet have supervisors in each location that I trust to properly hold down the fort.

When I first arrived at Fuckwittery, Inc., most of the employees followed instructions more poorly than Joby The Dog (NSFW). Gradually, things improved thanks to fines, incentives and forcing people to do things over and over again until their work reached an acceptable standard. At least, things seemed better while I was around the office. I always had a sneaking suspicion that the fragile veneer of professionalism cracked when I was away.

So I decided to employ my former boss's "If you can't be everywhere, be unpredictable" tactic. One day, on my way out to a short meeting, I stood in the middle of the reception and proclaimed loudly to all and sundry that I was positively exhausted and would be going home after the meeting...don't come looking for me this afternoon, gang, I won't be here!

When I returned a couple hours later, the office looked pretty much like that scene from the movie "Gremlins" where said monsters take over the town's bar and movie theater. A gaggle of employees loitered around the reception desk while one guy serenaded them with a Hindi love song, gangsta rap blared from another employee's PC, other employees crowded around a computer watching videos on YouTube.

A collective gasp went up as people spun around and saw me standing in the middle of the office - deer in the headlights looks and slack jaws ﻿﻿﻿﻿﻿﻿all around.

"You said you were going home for the day," the singer protested, a tinge of accusation in his voice.

"I was conducting an experiment...to see if you folks have enough work to do," I countered.

Since then, I've done my best to ensure that all Fuckwittery, Inc. employees have a workload that is roughly 110% of what I believe is feasible. And I've continued to use the "Bye gang, I'm signing out!" trick. The employees of Fuckwittery, Inc. fell for it several times - apparently the prospect of being in the office unsupervised was just too delicious. Gradually, as the ax fell for missed deadlines, the employees wizened up and learned to control themselves while I was away.

Part of me is alittle sad that my co-workers have gotten hip to my game, because I'll probably never again have the pleasure of creeping into the office, hiding behind a plant and watching the front desk staff prepare the following mess-free, work-friendly snack:

Method: Clear reception counter of any work-related items. Place large piece of flatbread directly on top of reception counter. Unwrap processed cheese slices and lay evenly across flatbread, pile discarded cheese product wrappers elsewhere on reception desk. Remember, it is the "office boy's" responsibility to dispose of these wrappers, not yours!

Employ the tooth technique to open the ketchup packets and use the tip of your index finger to swirl the ketchup through the sea of mayonnaise. All mayonnaise and ketchup packets should  be piled on top of cheese product wrappers. Don't worry if a packet or two fall on the ground, just point it out to the office boy when he walks by.

When you have blended the ketchup into the mayonnaise, scatter mixed vegetable pickles across your concoction.

Next, take a small packet of potato chips. Let the air out of the bag and place the flat bag on the reception counter beside your sandwich. Pick up your computer mouse and use it to crush the potato chips into a fine dust. Sprinkle potato chip dust across the top of the sandwich.

Now for the final flourish, starting at the left end of the sandwich, roll the bread tightly - just like a sushi chef rolls a tuna maki.


*For the folks back home, Sand Landian pickles look like this: 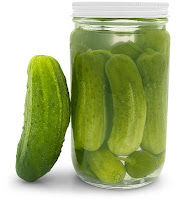 Misadventures in HR
Originally from the US, I recently moved to an unspecified Middle Eastern country to oversee the expansion of a local business. Talent's scarce, fuckwittery abounds and every once in awhile I'm tempted to set my hair on fire and jump out the window.